For a long time we have wanted a wormery. They are fantastic systems for turning vegetable waste into beautiful nutritious soil. They are small and you can locate them near the house.

But I’ve never owned one, so didn’t have experience of them. But I thought – we have loads of resources, I’m sure I could make one.

I used two large (and slightly differently sized) clean paint buckets with lids, a stanley knife, drill, some pieces of dowel and some old fleece.

And this is what I did. 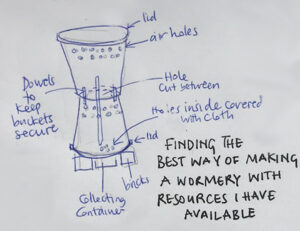 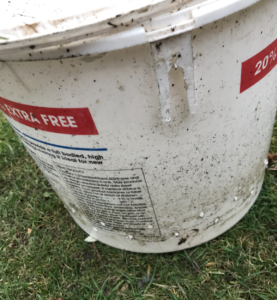 1. This is the bottom bucket. Two rows of holes were drilled about an inch from the bottom.

2. A large hole was cut at the bottom with a stanley knife and holes drilled in the lid, spaced so that any excess liquid would be directed into a tub underneath it. 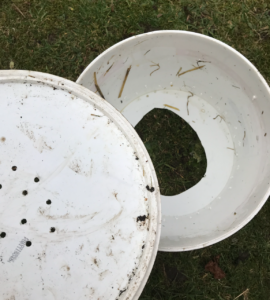 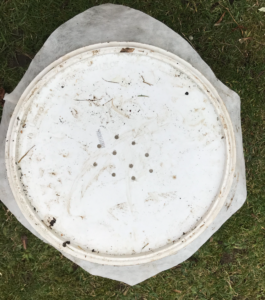 3. A couple of layers of fleece were put l underneath the lid.

4. The container was turned upside down, so that the lid became the bottom. 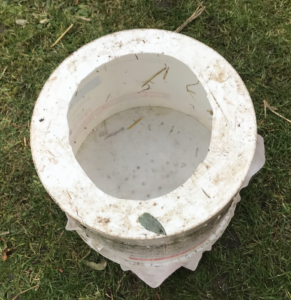 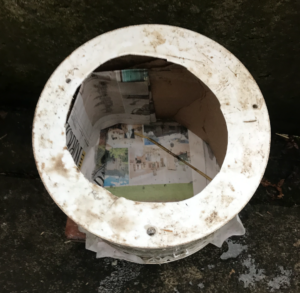 5. This was lined with cardboard and newspaper

6. And placed onto bricks 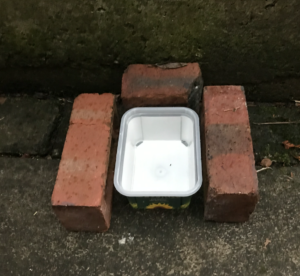 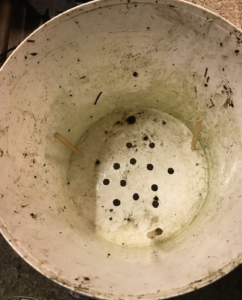 7. The top buckets had holes drilled into the bottom.

8. And dowels pushed into holes to keep the containers together. 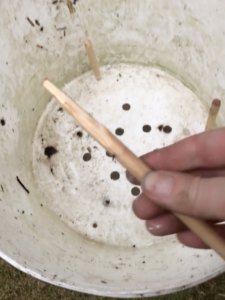 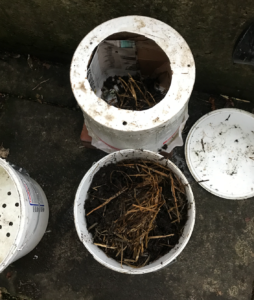 9. Worms from the compost heap were put into the bottom chamber 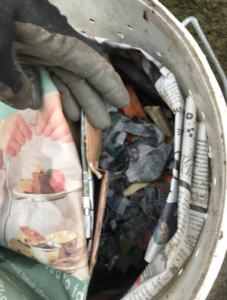 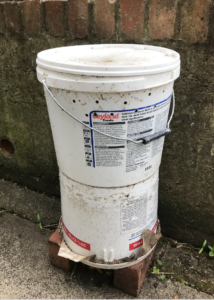 And hey presto! One wormery.

October 2021 – Looking in the bucket to see what has happened… 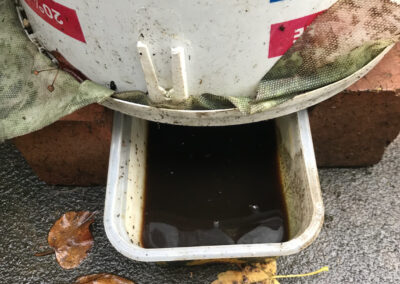 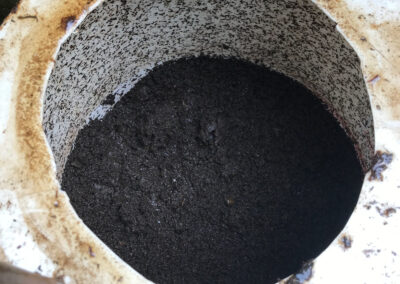 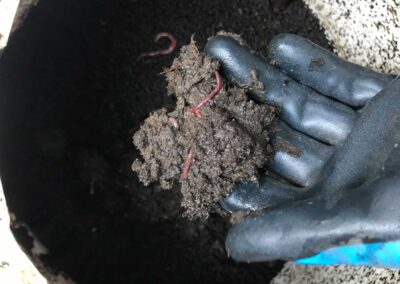 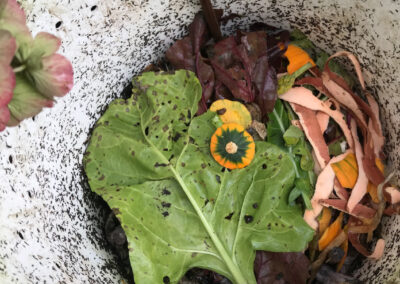 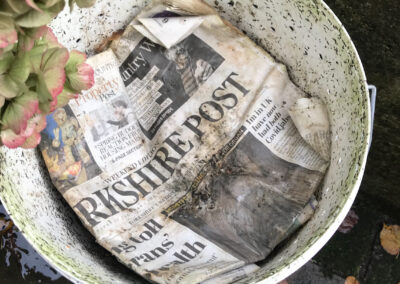 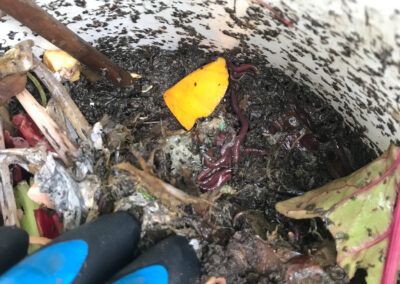 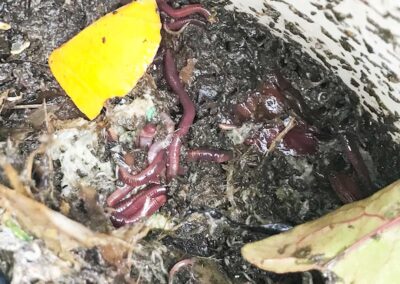 Below is my thinking process, using a framework called CEAP (Collect information, Evaluate the information, Apply Permaculture principles and ethics, Plan the solution) 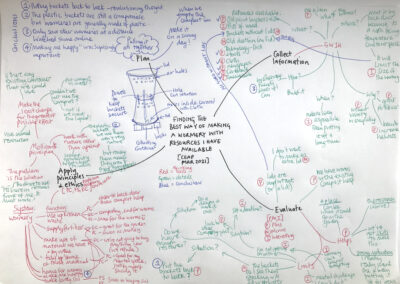 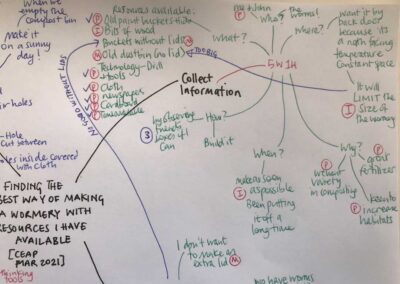 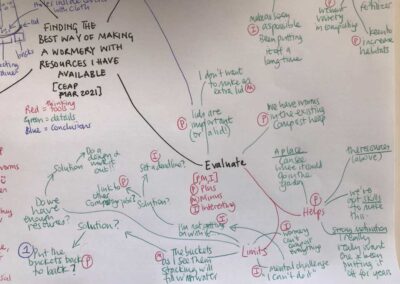 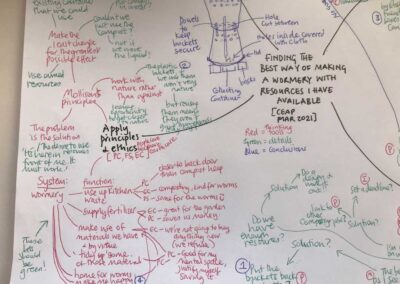 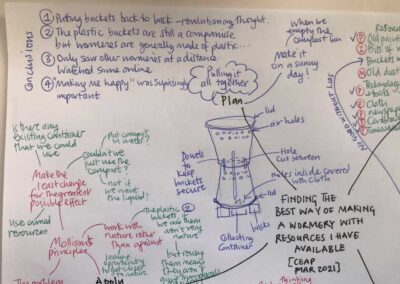 Key implemented learnings as a result of doing the design process:

Tools used: 5W1H (what, where, when, who, why, how), PMI (plus, minus, interesting), Functions / ethics tool, mind mapping

The wormery design has been really successful. It’s easy to move around if we need to get behind it, easy to feed food into and is secure. So far we have not tried to replenish it, taking out some of the soil and haven’t had opportunity to dismantle it. I’m a bit nervous about hurting the worms when I take the dowels out. I’ll update this part when I do.

The downside is it’s quite ugly. I’m thinking of making some kind of construction to go round it…

Having already decided that I wanted a wormery I didn’t give thought to whether it was a good idea. It was only on reflection that I made that assumption. As a result the processes and tools were all skewed in that direction. Now, I think it might have been better to do a PMI check on why we wanted a wormery. I think we’d have still gone ahead, but I’m reminded that I rushed more quickly towards the solution than was perhaps wise.

This was more for ‘me’ than for ‘us’. Although my partner didn’t comment either way on whether he thought it was a good idea or not, I know I was the driver to get it. A client interview could have been helpful in that.

As a result of going through the design process, CEAP, it revealed that I wasn’t convinced that making a wormery was as good idea as I thought it was when I embarked on it. It also showed that the learning how to do it was a strong motivation.

Observing our resources as part of the 5W1H exercise was really helpful and thinking about that in the context of where the wormery would be placed.

Keep in touch and get my updates

We use cookies on our website to give you the most relevant experience by remembering your preferences and repeat visits. By clicking “Accept”, you consent to the use of ALL the cookies.
Cookie settingsACCEPT
Manage consent

This website uses cookies to improve your experience while you navigate through the website. Out of these, the cookies that are categorized as necessary are stored on your browser as they are essential for the working of basic functionalities of the website. We also use third-party cookies that help us analyze and understand how you use this website. These cookies will be stored in your browser only with your consent. You also have the option to opt-out of these cookies. But opting out of some of these cookies may affect your browsing experience.
Necessary Always Enabled

Performance cookies are used to understand and analyze the key performance indexes of the website which helps in delivering a better user experience for the visitors.

Analytical cookies are used to understand how visitors interact with the website. These cookies help provide information on metrics the number of visitors, bounce rate, traffic source, etc.

Advertisement cookies are used to provide visitors with relevant ads and marketing campaigns. These cookies track visitors across websites and collect information to provide customized ads.

Other uncategorized cookies are those that are being analyzed and have not been classified into a category as yet.